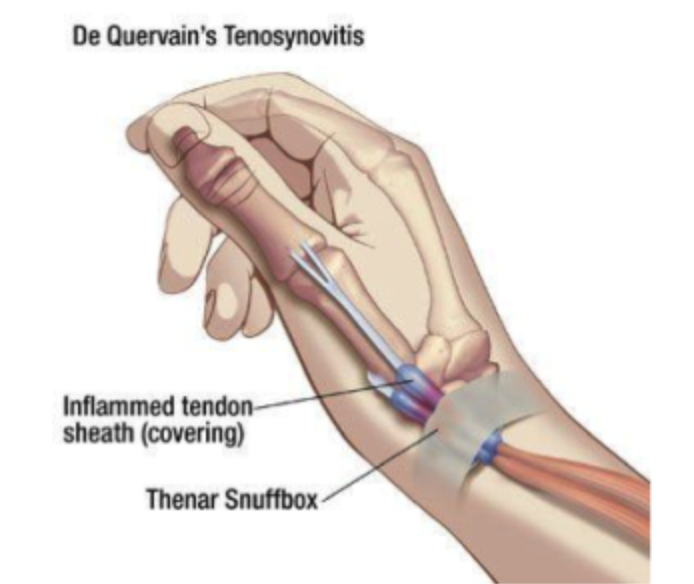 De Quervain’s tenosynovitis is a condition that affects the two tendons that control movement of the thumb called the abductor pollicis longus (APL) and the extensor pollicis brevis (EPB).

On their way to the thumb, the APL and EPB tendons travel side by side along the outside edge of the wrist and pass through a sheath (tunnel) that helps keep the tendons in place. This tunnel is lined with a slippery thin soft-tissue layer called tenosynovium.

The tenosynovium reduces friction between the tendons and their surrounding structures to allow the two tendons to glide easily through tunnel as they move the thumb. Inflammation of the tenosynovium and tendon is called tenosynovitis.

In de Quervain’s tenosynovitis, the tendons within the tunnel become inflamed which constricts their movement due to increased friction. This also leads to pain and tenderness along the thumb side of the wrist which is most noticeable when forming a fist, grasping or gripping, or when turning the wrist.

De Quervain’s tenosynovitis is associated with overuse leading to a repetitive strain injury, which can become a vicious cycle due to chronic inflammation leading to stenosis of the sheath.

Inflammatory arthritic conditions such as rheumatoid arthritis, and osteoarthritis that affects the thumb can also cause de Quervain’s tenosynovitis.

The condition is also common during pregnancy. Scar tissue from direct trauma to the wrist or tendon can also restrict movement of the tendons. De Quervain’s tenosynovitis has the highest incidence among middle-aged women.

De Quervain’s tenosynovitis can have a gradual or sudden onset of localized pain or tenderness over the thumb side of the wrist which is most noticeable with thumb and wrist motion. If left untreated, the pain may spread farther up the forearm and/or into the thumb.

Additionally, swelling or thickening may be seen over the thumb side of the wrist. Pinching, grasping and certain movements of the thumb and wrist will aggravate the pain. The patient may have difficulty moving the wrist and thumb, and feel a “snapping” or “catching” sensation with thumb movement. In certain cases, the two tendons may “squeak” during the thumb and wrist movements.

In our practice, treatment of de Quervain’s tenosynovitis would be very similar to other overuse injuries and would depend on the severity of the condition. The main objective of treatment will be to reduce or eliminate the cause of irritation of the thumb tendons.

Activity modification, ergonomic changes, and minimizing exposure to positions that aggravate your symptoms will be recommended. Modalities such as electrotherapy and cold laser therapy will be used to reduce inflammation and pain. Soft tissue therapies such as Graston Technique® (GT®) and Active Release Techniques® will be administered to the affected soft tissues as tolerated.

Once pain and inflammation has decreased, you will be prescribed a rehabilitative treatment protocol consisting of static stretching and strengthening exercises of the thumb, wrist, and forearm extensor and flexor muscle groups. The goal will be to contribute to better form and use of other muscle groups, limiting the irritation of the tendons. If you fail to respond to conservative treatment, a consultation for injections and surgery will be recommended. 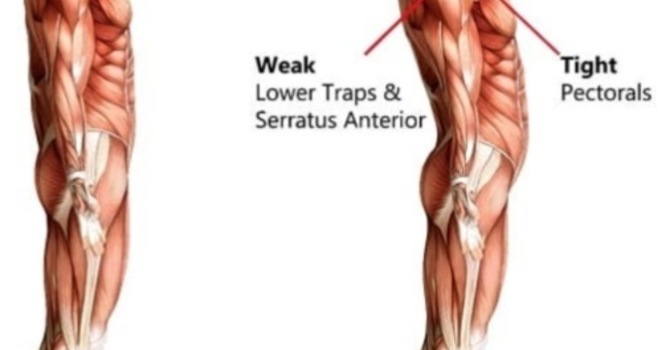 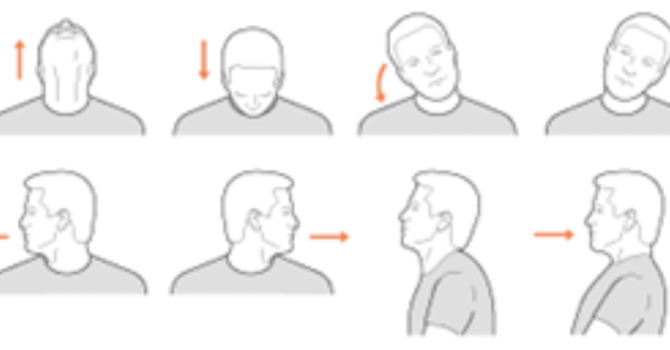 I woke up with neck pain, what do I do next? 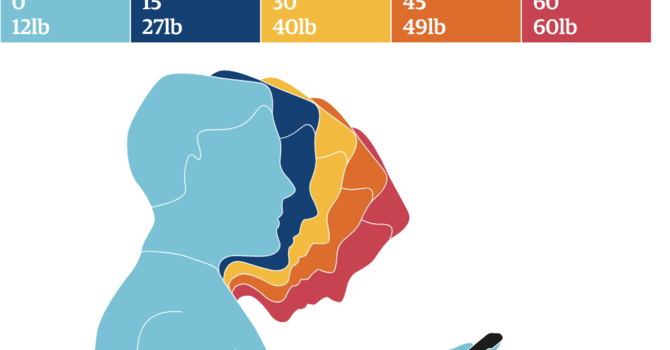 Setting up your workstation to save you from neck pain!